In the fall of 2013 a small group of hockey families came together with one idea; to create an environment at a place where their kids could not only play hockey but learn about sportsmanship, make friends and learn valuable life lessons.  These families were convinced that there was a place where not only would their ideas and concerns be heard, but most of all they believed that their kids deserved more than they were being given.

Through many hours of work a location was found to make that idea a reality.  The families packed up their hockey gear with the intentions of planting roots at the newly built Pittsburgh Penguins Foundation Dek at Riverview Park in Oakmont, PA. The families knew that the new venture wasn’t going to be easy but if they stuck together they would make it work.

In January 2014 the Inaugural Season of Riverview Dek Hockey Raptors began.  There were a few bumps in the road but the families refused to yield because they could see that their hockey family was growing with each new child that came to learn and play the great game of hockey.  In July of 2017 we hosted our Light Up The Night ceremony in which our newly installed outdoor lights shone bright on everyone’s hard work and dedication.

Now here we are in 2022, Riverview Dek Hockey has continue to grow but have remained true to what inspired them the most, to create a family friendly environment for children of all skill levels to have fun, learn, and enjoy the game of hockey with their friends.

So if you are looking for a place where your child can learn, play and grow their love for the game hockey, come to Riverside Park and join the Raptor Family.

OUR HOME DEK IS LOCATED IN OAKMONT, PA. 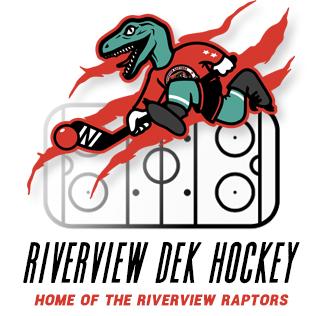